Where do we get our information from online? The findings of a survey

In a world where “good information” is becoming increasingly strategic, a recent survey by Comscore, a US research firm with sophisticated data science and analysis skills, threw some light on the subject. Dated July 2019 and entitled, From Viral to Tribal: Our Changing Behaviour to Online News, the survey looked into the changing behaviour towards digital news in Italy of three generations: Generation Z (18 – 22-year-olds), Generation Y (the so-called Millennials, between 23 and 38) and Generation X (39 – 54-year-olds). The aim was to try and identify the main differences between the way each generation used digital news. Following are some of the results regarding the sources and format used for accessing the news and compared, where available, with data from the same survey carried out in the UK and the US.

One of the main differences between the generations is how they use news sources: while older generations say they get their news mainly from news sites, social networks are the primary source of information for the young generations. More specifically, Generation X tended to get 50% of their news from news websites, 25% from social media and 19% from generic portals. This “media diet” is not that different for Generation Y, who also get 50% of their news from news websites. However, the news they obtain from social media rises to 31%, whilst news from other sources drops to just 16%. As for Generation Z, the situation is quite different: having grown up in a more fragmented media environment, they most probably haven’t got attached to any one particular source for their news. However, they are also more likely to be loyal more to a particular platform rather than to a provider of the news. In their case, the percentage of news they get from news websites dropped to 35%, while the share of social media rises to 43%. Other websites again account for the remaining 16%.

News websites remain the most popular source for online news

However, it is important to note that when actively searching for information on current events and news in general, established news websites remain the most popular source for all generations. In addition, all generations say they trust established news websites in terms of honesty and accuracy more than news they get from generic portals, on their mobile phones (as suggested news or news feed) and from social networks.

80% of all generations stop at the first source consulted 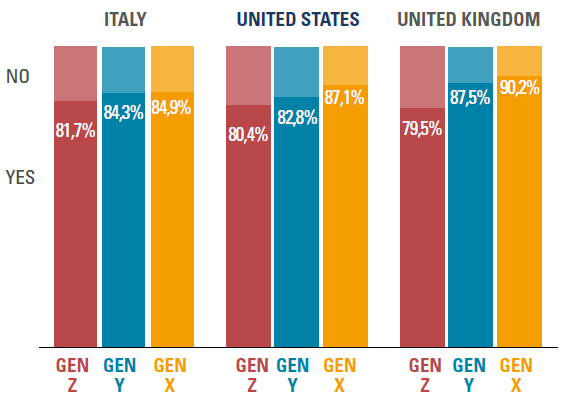 Despite their popularity as a news source, relatively few people re-post a news item on social media and this is particularly so among the very young. The latter, more than other generations, appears to be more worried about how polarised discussions on “sensitive” subjects can get and how they can affect their “digital identity”. This situation – no fact-checking – should give publishers pause for thought, as they tend to evaluate their content mainly by its potential to go viral and have based their business models on social media propagation, measuring shares, traffic and page views on platforms.

New expectations and new behaviors in the world…

In search of well-being at work