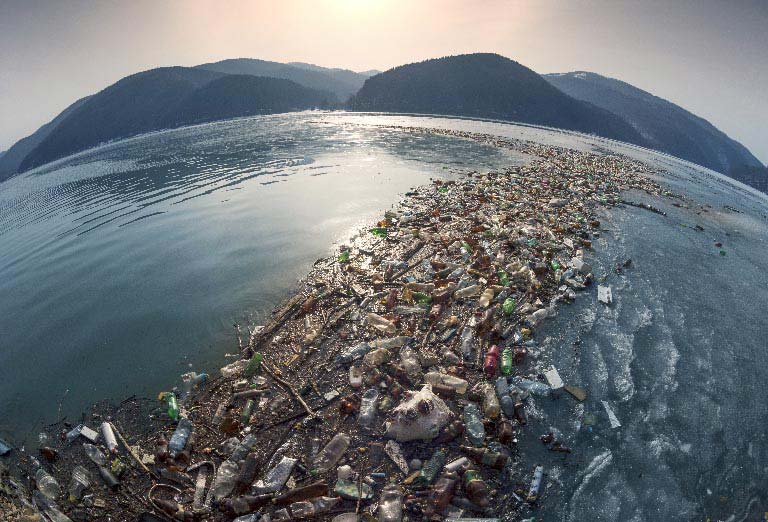 #weareallinthesameboat. This appeal was started by Alex Bellini, navigator and explorer, who, in order to bring attention to the problem of plastic in the oceans and spread a culture that is more attentive to environmental protection, embarked on a new challenge: to travel the 10 rivers most polluted by plastics in the world and witness plastics accumulating in the Great Pacific Garbage Patch, the plastic island floating in the Pacific Ocean. The project is called 10 Rivers 1 Ocean.

Alex’s journey.
Alex Bellini arrived on the Ganges in early March. This is the first of the 10 rivers he plans to sail and he used the waste he found there to build the raft he is using to accomplish his mission. After the Ganges, he will tackle the waters of the Hai, Yellow, Yangtze and Pearl Rivers in China, the Indus in Pakistan, the Nile and Niger in Africa, the Amur River in Asia and the Mekong in Indochina.

His goal is to follow the flow of plastics until he reaches the Great Pacific Garbage Patch, the floating island three times the size of France, formed by waste accumulation. The 10 rivers were not chosen by chance: according to research by the Christian Schmidt Helmholtz Center for Environmental Research in Leipzig, it is precisely those rivers that contribute to 80% of pollution into the oceans by pouring into the sea about 8 tonnes of plastic debris every day.

Sofidel “NextGen”: building a sustainable future together with young people

In order to help the new generations better understand the importance of socially and environmentally responsible development, Sofidel is developing in 2019 a series of communication initiatives dedicated to sustainability, entitled NextGen, featuring the younger generations. Gunter Pauli, founder of Zero Emissions Research and Initiatives (ZERI) – an international network of researchers, scientists and economists committed to designing and planning new production and consumption methods with reduced environmental impact – said: “My generation has failed. Where the Millennials will succeed”. Sofidel, like him, believes in young people, in their strength and in their vision. Find out more on Sofidel NextGen