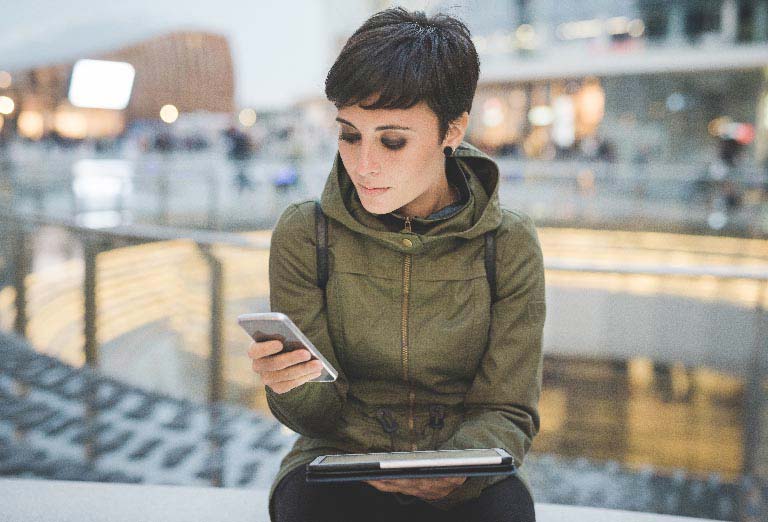 There was a time it was easy to say that young people were a homogenous category, at least since the emergence of teenagers in the 1960s. Rapid changes in technology today divide young people into at least two categories: Millennials (Generation Y) and Centennials (Generation Z). The latter are the most mysterious: their diversity, not fitting into the usual categories, is inherent in being digital natives. People born after 1995 have never known a world without the internet.

A possible identikit.
A research study commissioned by IBM in 2017 aims to describe Generation Z through their buying behaviours. Although they do use the web spasmodically (spending 74% of their time online and only 6% dedicated to group activities in person with peers) and are always sharing information, they are very attentive to privacy (less than 30% upload news about their lives or their well-being/health) and adopt even more restrictive procedures than those established by the rules in force.

Smartphone or Tablet? That’s the dilemma.
The tablet is not their exclusive domain (only 10% use it versus 75% for the smartphone and 45% for the laptop): they love both the immediacy of the smartphone and the in-depth nature of the computer, but not the “middle option” represented by tablets. They influence their families when it comes to buying food and drink (in 77% of cases) and, curiously, 76% influence family furniture purchases. Even more surprising, perhaps, is that they report a preference for shopping in a store (67%), rather than online.

A generation that networks.
Generation Z uses the internet more for social and sharing purposes than as a practical tool. These young people love stories and content more than exchange. There is no data on the sustainability outlook of this generation, yet their attention to the truth online and intolerance of unsolicited communications portray an image of young people who are increasingly disenchanted and, therefore, able to distinguish between good practices and statements of principle. That’s enough to give us hope for a new beginning for sustainability too.

Who is more able to imagine and create the future than young people?

In 2019, Sofidel is launching a series of unique initiatives aimed at and run by younger generations. The first one of them is the Group’s calendar, entitled NextGen, that features children of some of our colleagues as protagonists. It’s down to them, to look at the 7 United Nations Sustainable Development Goals (SDGs) closest to Sofidel. Seven goals for which we are most directly responsible. For more information, have a look at Sofidel’s institutional campaigns.